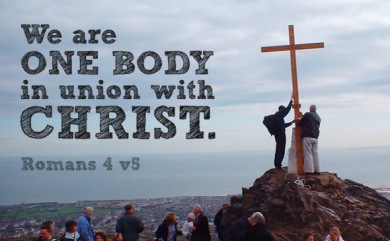 Pope Francis on unity and diversity in the Church (Homily for Pentecost, 2017):

“By His presence and activity, the Spirit draws into unity spirits that are distinct and separate among themselves (Cyril of Alexandria, Commentary on the Gospel of John, XI, 11). He does so in a way that affects true union, according to God’s will, a union that is not uniformity, but unity in difference.

“For this to happen, we need to avoid two recurrent temptations. The first temptation seeks diversity without unity. This happens when we want to separate, when we take sides and form parties, when we adopt rigid and airtight positions, when we become locked into our own ideas and ways of doing things, perhaps even thinking that we are better than others, or always in the right, when we become so-called “guardians of the truth.” When this happens, we choose the part over the whole, belonging to this or that group before belonging to the Church. We become avid supporters for one side, rather than brothers and sisters in the one Spirit. We become Christians of the “right” or the “left,” before being on the side of Jesus, unbending guardians of the past or the avant-garde of the future before being humble and grateful children of the Church. The result is diversity without unity. The opposite temptation is that of seeking unity without diversity. Here, unity becomes uniformity, where everyone has to do everything together and in the same way, always thinking alike. Unity ends up being homogeneity and no longer freedom. But, as Saint Paul says, “where the Spirit of the Lord is, there is freedom” (2 Cor 3:17).

“So the prayer we make to the Holy Spirit is for the grace to receive his unity, a glance that, leaving personal preferences aside, embraces and loves his Church, our Church. It is to accept responsibility for unity among all, to wipe out the gossip that sows the darnel of discord and the poison of envy, since to be men and women of the Church means being men and women of communion. It is also to ask for a heart that feels that the Church is our Mother and our home, an open and welcoming home where the manifold joy of the Holy Spirit is shared.”

In today’s general audience, Pope Francis said, “Calling God by the name ‘Father’ is not something that can be taken for granted. We are tempted to use the highest titles, which are respectful of his transcendence. But calling him ‘Father’ puts us in His confidence, like a child talking to his dad, knowing that he is loved and cared for by him.” The Pope added, “God is a Father in His own way: good, helpless before man’s free will, only able to conjugate the verb ‘to love’ . . . God is a father who does not apply human justice and is ready to forgive and embrace his long lost son . . . We are never alone. We can be distant, hostile, we can even declare ourselves ‘without God.’ But the Gospel of Jesus Christ reveals that God cannot be without us: He will never be a God ‘without man’.”

“Our condition, as children of God, is the fruit of the love of the heart of the Father. It does not depend on our merits or our actions, thus no one can take it away from us. No one can take this dignity away from us, not even the Devil! . . . In whatever situation in life, I must not forget that I will never stop being a child of God – of a Father Who loves me and awaits my return. Even in the worst situation in life, God waits for me and wants to embrace me . . . We all need to enter the house of the Father and participate in His joy, in the feast of mercy and of fraternity” (Pope Francis, General Audience, May 11, 2016).

Joint Declaration of Pope Francis and Patriarch Kirill of Moscow and All Russia (as released by the Vatican Press Office).

“The grace of the Lord Jesus Christ and the love of God the Father and the fellowship of the holy Spirit be with all of you” (2 Cor 13:13).

1. By God the Father’s will, from which all gifts come, in the name of our Lord Jesus Christ, and with the help of the Holy Spirit Consolator, we, Pope Francis and Kirill, Patriarch of Moscow and All Russia, have met today in Havana. We give thanks to God, glorified in the Trinity, for this meeting, the first in history.

It is with joy that we have met like brothers in the Christian faith who encounter one another “to speak face to face” (2 Jn 12), from heart to heart, to discuss the mutual relations between the  Churches, the crucial problems of our faithful, and the outlook for the progress of human civilization.

2. Our fraternal meeting has taken place in Cuba, at the crossroads of North and South, East and West. It is from this island, the symbol of the hopes of the “New World” and the dramatic events of the history of the twentieth century, that we address our words to all the peoples of Latin America and of the other continents.

It is a source of joy that the Christian faith is growing here in a dynamic way.  The powerful religious potential of Latin America, its centuries–old Christian tradition, grounded in the personal experience of millions of people, are the pledge of a great future for this region.

3. By meeting far from the longstanding disputes of the “Old World”, we experience with a particular sense of urgency the need for the shared labour of Catholics and Orthodox, who are called, with gentleness and respect, to give an explanation to the world of the hope in us (cf. 1 Pet 3:15).

4. We thank God for the gifts received from the coming into the world of His only Son. We share the same spiritual Tradition of the first millennium of Christianity. The witnesses of this Tradition are the Most Holy Mother of God, the Virgin Mary, and the saints we venerate.  Among them are innumerable martyrs who have given witness to their faithfulness to Christ and have become the “seed of Christians”.

5. Notwithstanding this shared Tradition of the first ten centuries, for nearly one thousand years Catholics and Orthodox have been deprived of communion in the Eucharist. We have been divided by wounds caused by old and recent conflicts, by differences inherited from our ancestors, in the understanding and expression of our faith in God, one in three Persons – Father, Son and Holy Spirit. We are pained by the loss of unity, the outcome of human weakness and of sin, which has occurred despite the priestly prayer of Christ the Saviour: “So that they may all be one, as you, Father, are in me and I in you … so that they may be one, as we are one” (Jn 17:21).  END_OF_DOCUMENT_TOKEN_TO_BE_REPLACED

“God does not want our condemnation, but our salvation. God does not want the condemnation of anyone. Someone could tell me that the condemnation of Pilate could be considered just, or even that of Judas, but no! The God of Mercy wants to save us all, the problem is who really wants to allow God to enter into his heart . . . Here is what the Lord says through the prophet Ezekiel: “Do I take any pleasure in the death of the wicked […] or rather that he desists from his evil ways and live?” This is what is pleasing to God. This is the heart of God, the heart of a Father who loves and wants that His children live in goodness and justice, thus live in fullness and become happy. The heart of a Father who goes beyond our narrow concept of justice, to open up for us the boundless horizons of His mercy” – Pope Francis, General Audience on 2/3/2016 in Saint Peter’s Square, Vatican City.

“‘The Lord God waits, He does not condemn us and cries. Because He loves us!’ He behaves ‘like a mother hen with little chickens;’ this is our victory” – Pope Francis, Homily at Casa Santa Marta, October 29, 2015. Read more here.

“God is like a gentle father who holds us by the hand and we need to become like a small child to have a dialogue with Him . . . First, love is more about giving than receiving. Second, love is more about actions than words. When we say it’s more about giving than receiving, that’s because love communicates, it always communicates. And it’s received by the one who is loved. And when we say that it’s more about actions than words, that’s because love always generates life and makes us grow.

“To understand God’s love, we need to become small like a child and what God seeks from us is a relationship like that between a father and child. God gives us a caress and tells us: I’m by your side . . . This is the tenderness of our Lord and of His love; this is what He tells us and this gives us the strength to be tender. But if we feel we’re strong, we’ll never experience those caresses from the Lord, those caresses from Him that are so wonderful. ‘Don’t be afraid, for I am with you and I’ll hold your hand’ . . . These are all words spoken by the Lord that help us to understand that mysterious love He has for us. And when Jesus speaks about Himself, he says: ‘I am meek and humble of heart.’ Even He, the Son of God, lowers Himself to receive His Father’s love.

“When we arrive, He’s there. When we look for Him, He has already been looking for us. He is always in front of us, waiting to receive us in His heart, in His love. And these two things can help us to understand the mystery of God’s love for us. In order to communicate this, He needs us to be like small children, to lower ourselves. And at the same time, He needs our astonishment when we look for Him and find Him there, waiting for us” – at Santa Marta, 6/27/14.